When my daughter came home for Christmas, she brought her new friend with her. Meet Penelope!

Now, any of you that have read my blog know that I have two rather large dogs.  I worried that poor little Penelope would be trampled in the stampede when my little darlings spotted her.  We took pains to keep her in the bedroom, making sure that the dogs didn’t get in. After a few days, my son decided it was time for the three to meet. At first, there was a lot of scrambling and whining, from everyone involved. You can imagine what the  bedroom looked like! We had been using it for storage while my daughter is away at school, so anything without a home had found it’s way in there. When she came home, everything was just shifted over to the side. Well. What happens when two large excited dogs and one small kitten end up in a room together? Chaos. Anything that had been neatly pushed out of the way was now all over the room. Fur flew like nobody’s business.  Surprisingly, Mercedes, the older larger dog decided to become Penelope’s protector.

She laid on the bed with the kitten between her front legs, and glared at anyone who came near. She would gently nudge Penelope with her nose and lick her fur. It was so cute!

Abby on the other hand, just wanted to play. Unfortunately Penelope had other ideas.

Abby wouldn’t have hurt her, but Penelope had to show her who was boss anyway. So all in all the visit went better than expected.  I think Mercedes missed her after she left!

The other day my daughter sent me a new picture of Penelope. When my daughter came home from school, she couldn’t find the kitten. She looked everywhere in the house, finally going to the laundry room in the basement.  This is what she found.

That’s right. Penelope had somehow managed to get herself in with the rabbit. 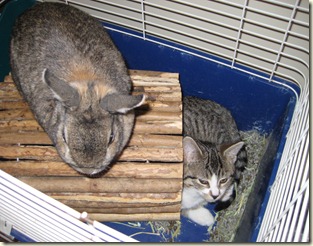 She was very happy nestled in the cage, and the rabbit didn’t seem to mind. We just have to wonder what she’ll get up to next!