I’ve had this fabric in my stash for a couple of years now.  I originally bought it for my Dad. A couple of summers ago I made him several short-sleeve shirts, all in fun, bright prints. Over the course of about three months, I think I made him about a dozen shirts, which he loved.  He has always had such a fun personality, and loves to wear bright cotton ‘Hawaiian’ shirts all summer long.  He always has some fun, off the wall project for me to ‘help’ him with.  Earlier this year he and my step-mom went to a ‘Titanic’ Ball.  Everyone dressed in clothing from the era, and the styles were just fabulous. Dad came up with the idea of making a lifejacket suitable to the time, and we spent a fun couple of hours creating it together. Unfortunately I forgot to get a picture of it. I took pictures of Dad and my Step-mom before the party, but never thought to include the lifejacket. My most recent project for Dad was a clown costume for work. It was a lot of fun to do, and I will post pictures as soon as I have them.
Now back to the reason for this post!  I made MacKensie a super easy skirt for Halloween. All I did was cut a long rectangle, sewn together with one side seam and my first-ever yoga style waistband. I will be using this method to make waistbands fairly often, it is so easy! 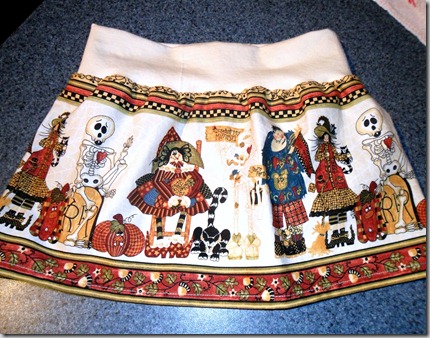 Getting a picture of the skirt on her was more difficult than actually sewing it. She is always on the move these days so pictures are literally taken ‘on the run’. 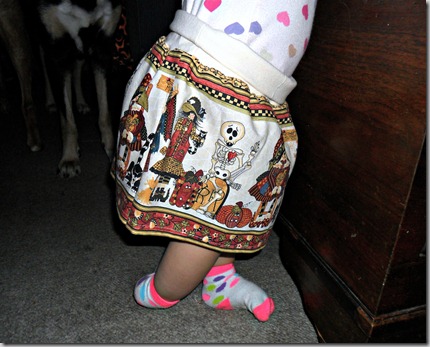 I put the skirt on her to try on after a quick diaper change, so nothing matches. The waistband turned out a little big, but still wearable. Hopefully it will still fit next year. This is the only pic of her standing still – sort of. 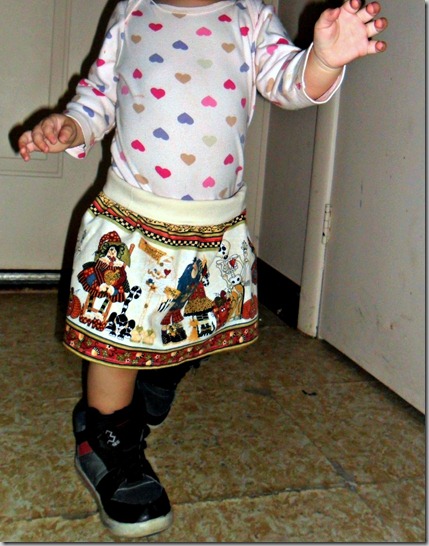 As usual, she is wearing someone else’s shoes. On the wrong feet no less. 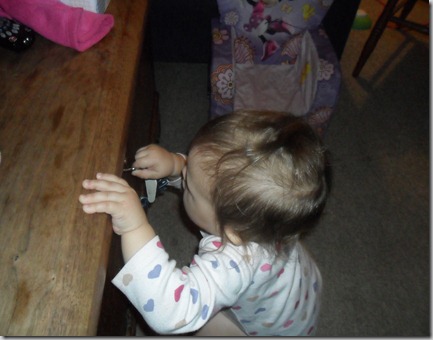 And here she is seconds after the skirt came off. She’s too busy to stop and put her pants on! Lately she has been obsessed with keys.  She discovered the lock on my cedar chest and has been trying to fit a key in the lock ever since. It is so hard to believe she is fourteen months old already.  Time passes so quickly!
See you next time!

Meet me at the party!

Blueberry Raspberry Jam – Or The EASIEST Jam You’ll Ever Make!

I heard about this jam from a friend some time ago, but it sounded too easy to be true. We both kind of dismissed it, never intending to try it. Well today curiosity got the better of me and I thought, ‘Why not?’  So I gathered my ingredients and got to work.  Twenty minutes later, I had some delicious jam!
The ingredients are simple,
4 cups of fresh or frozen blueberries ( I threw in a handful of raspberries I had in the fridge, just to use them up)
1 1/2 cups of sugar
1 box of lemon jelly powder 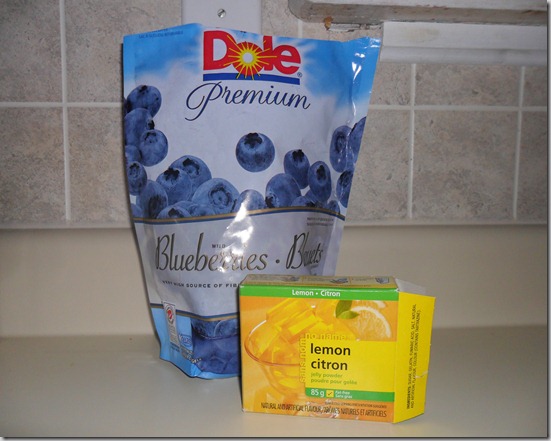 My sugar didn’t make it into the pic! 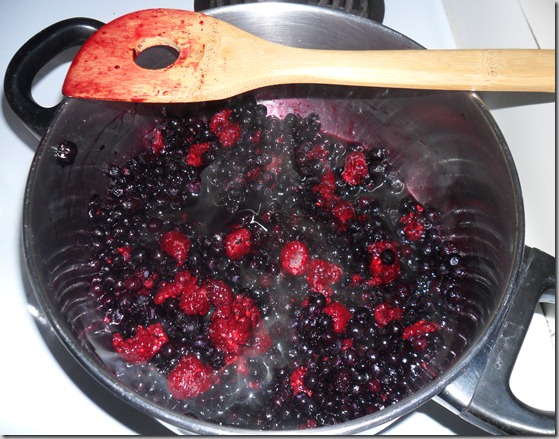 Place fruit in a large sauce pan, and break apart with a potato masher if desired. Heat slowly on medium high heat.  Add sugar and jelly powder and stir until dissolved. 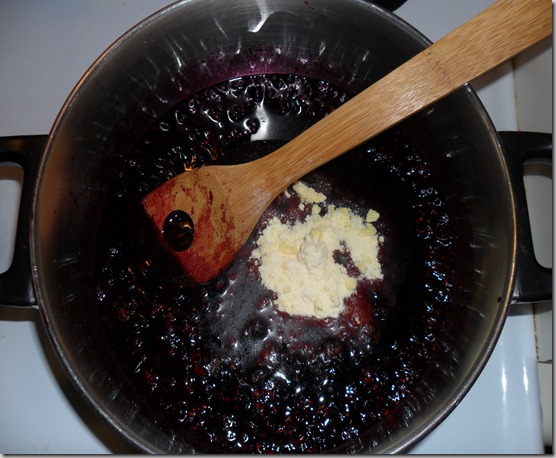 Bring to a boil and stir for two minutes. 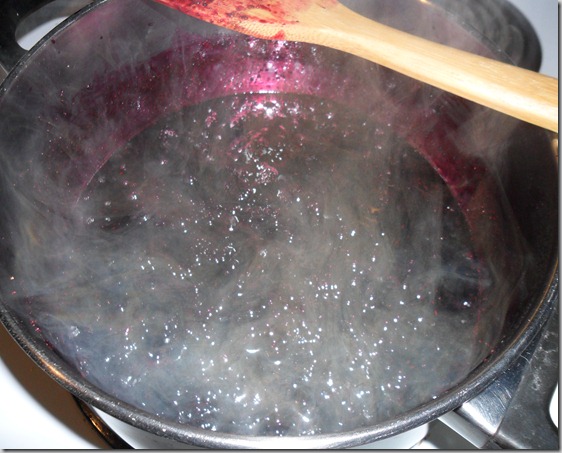 Annnd…, you’re done!  Allow your jam to cool slightly and pour into freezer safe containers.  I ended up with just less than 3 cups of jam. 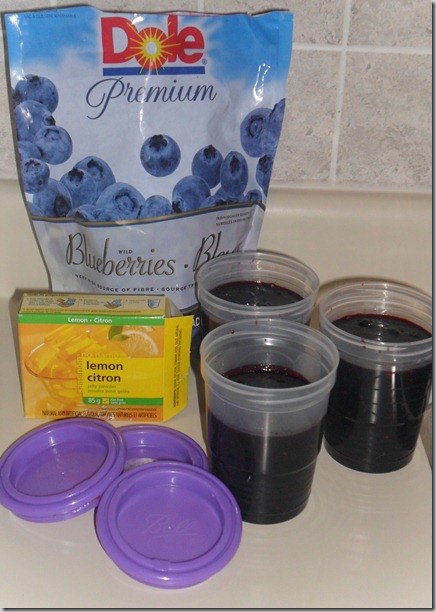 Allow your jam to set, and have a taste test!  My husband was impatient to try it, so my jam wasn’t quite set when I spooned some on a cracker, but it set quite nicely when it was completely cooled. 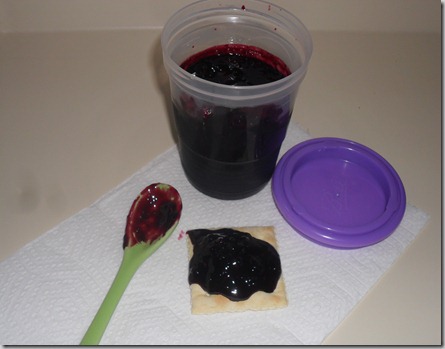 Store opened container in the fridge, and pop the rest in the freezer.
My family loves it!  I am going to try other fruit/jelly powder combinations too.  You are only limited to your imagination with this recipe.  Have fun with it, and your family will think you slaved away in the kitchen for hours!

Join me at these great parties,

Your Whims Wednesday @ My Girlish Whims
What I Whipped Up Wednesday @ Sugar and Dots
Wow Me Wednesday @ Ginger Snap Crafts
Made By Me @ JAQS Studio
What we Wore, Read and Made @ Rae Gun Ramblings
Lil' Luna Link Party
Whimsy Wednesdays @ The NY Melrose Family

Posted by Anne Maskell at 10:51 PM 5 comments: Links to this post

Holding on to Summer… Fashion Wise


In my usual fashion, I’m posting something that I made for my granddaughter a few weeks late.  A whole season late! I made this little romper for MacKensie way back in July! I used a piece of cotton blend fabric that I’ve had in my stash for years. I wasn’t too sure I’d like the romper when it was finished, so I used a fabric that I wasn’t worried about wasting. To my surprise and delight, it is cute after all! 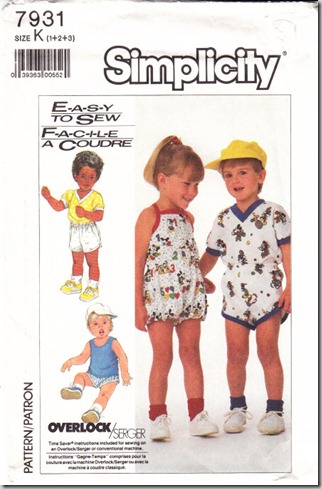 I made a size 1, and it fit perfectly.  The pattern doesn’t recommend the the bum ruffles, but when you have such a cute little bum to dress, why skimp on ruffles? If I ever make it again, I will lower the front neckline slightly, and maybe leave out the elastic at the ‘waist’.  The elastic seems to sit so high on the body that to me it looks strange. 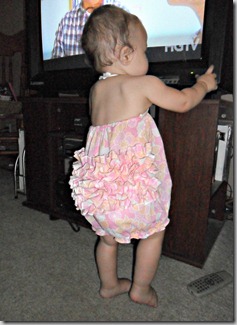 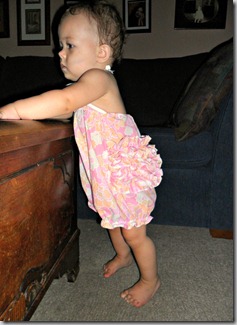 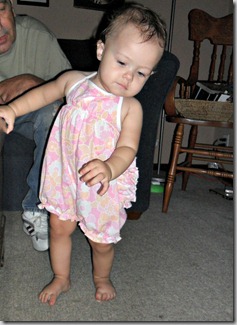 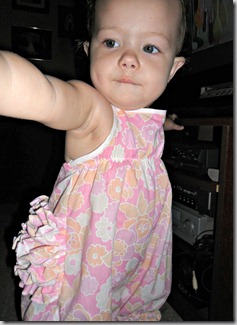 Isn’t she adorable? I may be slightly biased, but not much. Isn’t it amazing how quickly babies grow and change?  These photos were taken in mid-July. A month later she looked like this! 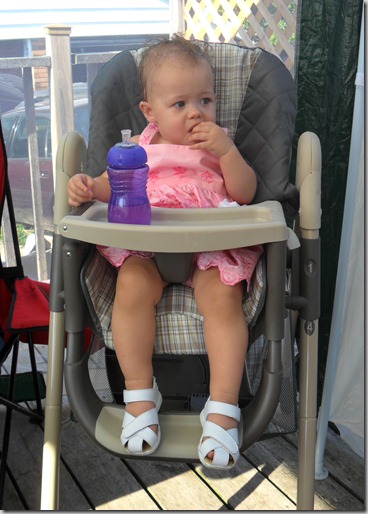 Join me at these great parties!