I spent some time this afternoon sorting old pictures to put in my scrap book.  My daughter put it together and gave it to me for Christmas two years ago.  I was so happy to receive it that I cried. She had spent hours searching through old pictures to find what she needed. When she had chosen what she wanted, she had the newer colour pictures copied into black and white or sepia toned. She used the original black and white copies.  The book is of four generations of women in my family. The first picture is of the four of us. 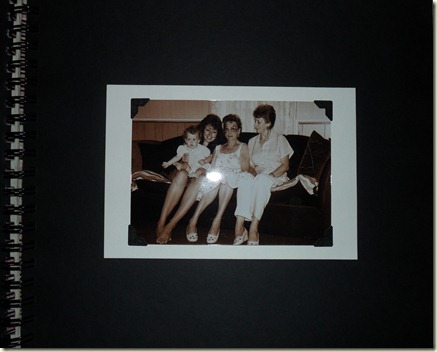 Hillary and I,  my Nan, and my Mom.
The book itself starts with pictures of my Nan with my Mom as an infant. It continues throughout my Mom’s childhood and teenage years. 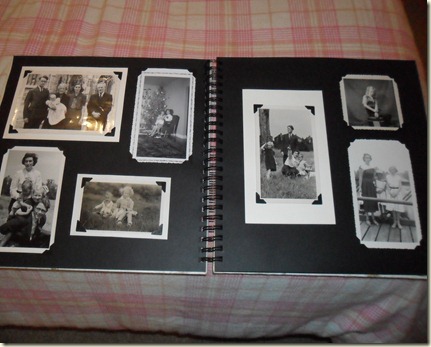 Then on to her as a young mother to me.  There are pictures of me as a baby and young child, on into me with Hillary as a newborn. The rest of the pictures are of Hillary throughout the years, up to when she left for university. I will be adding more pictures of Hillary, until (hopefully!) she has a daughter of her own. I hope this tradition carries on, so that the future daughters in my family are able to have a living record of the women before them.
I’ll leave you with one of my favourite pictures of my mom. When I was a baby, Mom worked at a high end jewellery store downtown.  The store also sold fine china and figurines.  Royal Doulton was doing an advertising campaign at the time, and approached my Mom to ‘model’ one of their figurines. 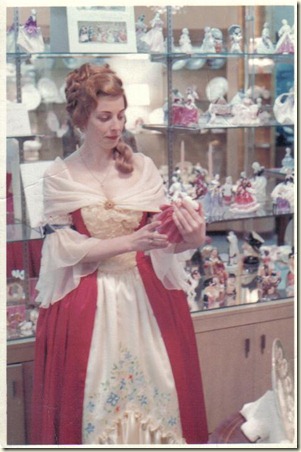 The figurine debuted in 1957, and was called ‘Southern Belle’.  Mom wore this gown for six days, eight hours a day. It weighed twenty five pounds,and was designed four a twenty four inch waist!  Amazingly, Mom styled her own hair every day. At the end of the week, she was presented a copy of the figurine. 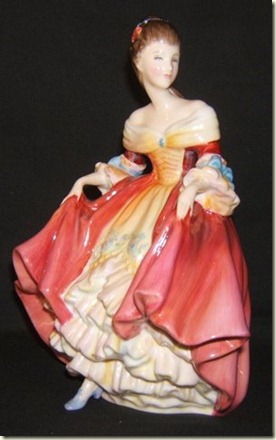 This, along with the scrapbook, will hopefully be passed down to future daughters!
Have a great weekend!  Anne

You can find all the great parties I'm linking to on my party page!
Posted by Anne Maskell at 7:53 PM